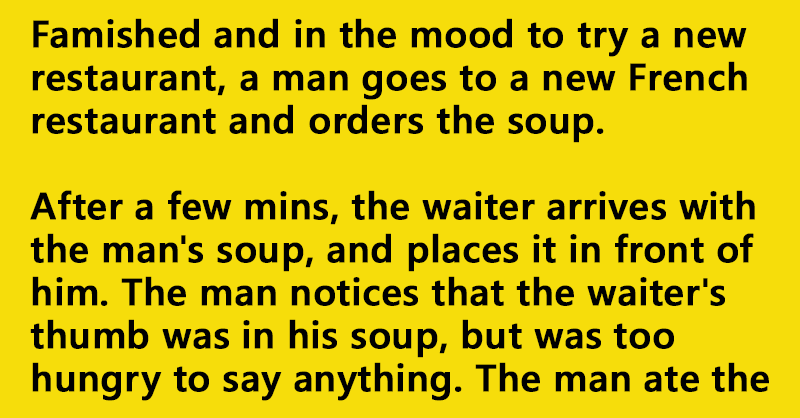 Famished and in the mood to try a new restaurant, a man goes to a new French restaurant and orders the soup.

After a few mins, the waiter arrives with the man’s soup, and places it in front of him. The man notices that the waiter’s thumb was in his soup, but was too hungry to say anything. The man ate the soup, and returned with friends the following night.

Having enjoyed the soup so much, the man orders the soup again. Again, he notices that the waiter has his thumb in the soup as it’s being placed in front of the man. Being with friends, the man didn’t want to make a scene, and enjoyed the soup with his friends.

He returned the following day for lunch, and again orders the soup. This time, when he notices the waiter with his thumb in the soup again, the man decides to speak up.

“You know, for the last 3 days, I’ve come in here and ordered the soup. And each time, I noticed you had your thumb in my soup. Care to explain”

” Well, I banged my thumb in my car door the other day, and my Dr told me to keep it in a warm place”

“How about you keep it out of my soup, and shove it up your ass?!”

” That’s what I do in the kitchen*