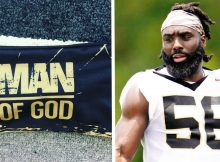 Demario Davis
On September 22, Demario Davis was fined for wearing a headband that said “Man of God” during a game against the Seattle Seahawks. The NFL fined the New Orleans
Read More

Lifestyle
It was one month after the horrific 9/11 terrorist attacks that country music star Lee Greenwood performed this powerful ballad. Millions of people were moved to tears when
Read More