As a parent, you do everything you can to keep your kids in line and enforce good behavior. When your kids are young and always in your sight, it’s easy to correct them and call them out when they’re misbehaving.

But at some point you have to send them out into the world on their own, and that’s when things get tricky. You never know for sure how your kids are behaving at school, and if they’re acting up it’s not like you can be there to reprimand them.

Or can you? When one concerned mom heard about her son’s classroom behavioral issues, she made a bold move to make sure he got his act together.

Becky Crandley, a mother of five from Kent, England, has been concerned about the behavior of one of her sons, a young teen boy in grade 8 who has been acting up in school.

The problems started the last school year, but while Becky thought her son’s behavior was just a part of growing up, she was dismayed that the behavior continued into the new school year and became tired of his “rudeness and disrespect.”

“I have had phone call after phone call about his behavior,” Becky told Kent Live. “He’s had an untold amount of detentions and isolations but nothing seemed to bother him.” 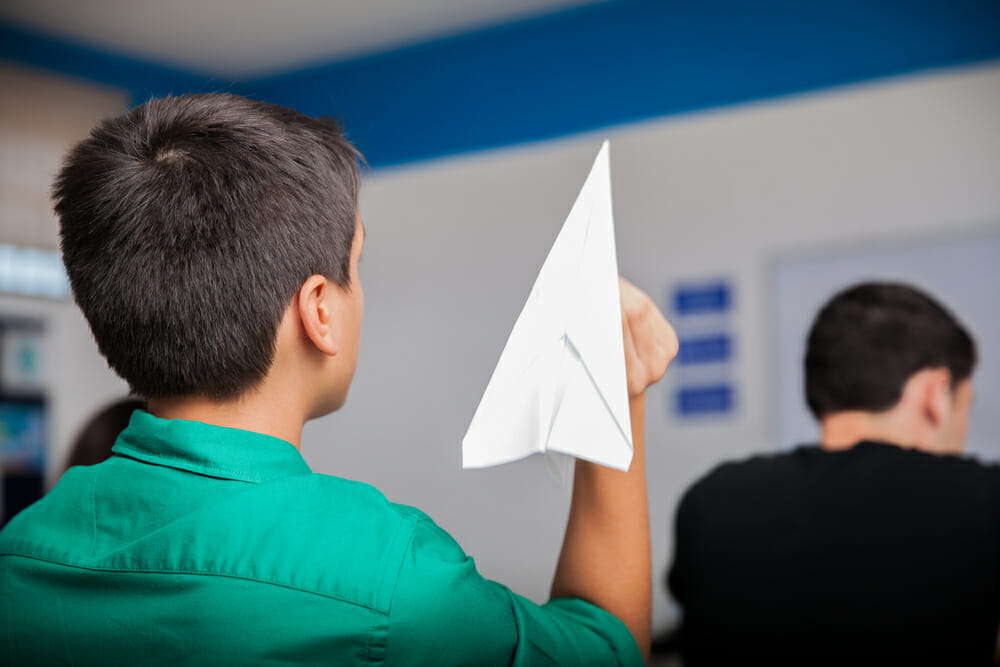 But Becky knew what students fear even more than detention: embarrassing parents.

The mom gave her son a warning: “I constantly threatened that I’d sit with him in school if needed,” Becky said, but added that her son would call her bluff: “He always laughed it off.”

But as the calls from school kept pouring in and no change in sight, Becky decided to finally make good on her threat.

“When his maths teacher emailed last week and said about an incident, I said to her I would join him.”

Sure enough, the mom arrived at her misbehaving teen’s math class and sat right down next to him:

Becky was introduced to the class as the student’s mom, really rubbing in the embarrassment: “He didn’t have a clue, and he was very embarrassed for sure,” the mom said.

She posted her story on Facebook, hoping to inspire other parents to stand up to their kids’ bad behavior.

“Most people know I’m a big softy when it comes to my kids but I’m also straight up and try my hardest to teach them the right way in life,” she wrote. “His mummy bear has had enough for sure, my foot is down and I will not lose.”

“Today’s children are getting worse by the second,” she told Kent Live. “I think more parents need to act upon their children’s behavior.”

“It’s scary to think what we will leave behind one day.”

Hopefully this will be a lesson to him and his classmates, showing just what happens when you disrespect your parents and teachers!