His Unexpected Reply Shocks The Teacher

Kids Know more than you think. They learn from each other, and in this internet age, they can discover things on their own like never before- this is one such story. 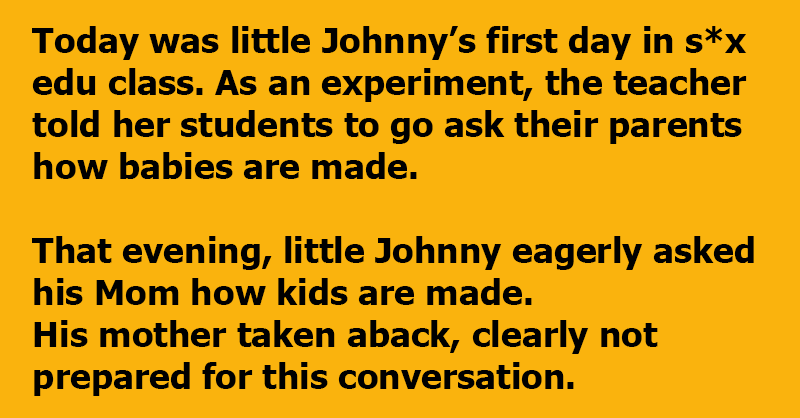 Today was little Johnny’s first day in s*x edu class. As an experiment, the teacher told her students to go ask their parents how babies are made.

That evening, little Johnny eagerly asked his Mom how kids are made. His mother taken aback, clearly not prepared for this conversation.

She blushes and said, ‘Well, Johnny, they get brought by the stork of course! The stork brought me, your dad, grandma, grandpa, great-grandma, great-grandpa and so on.’

Little Johnny nodded and memorised what his mother had said. The next day, everyone was to share with the class what their parents had told them. Little Johnny was eager to tell everyone what he had heard.

When it was his turn to speak in front of the class, he said ‘You see, here’s how it is: I was brought by the stork, just like my Mom, dad, grandpa, grandma, great-grandma and great-grandpa and so on.’

He continued in an excited voice, ‘So that means that nobody in my family has gotten laid on the last 200 years!’