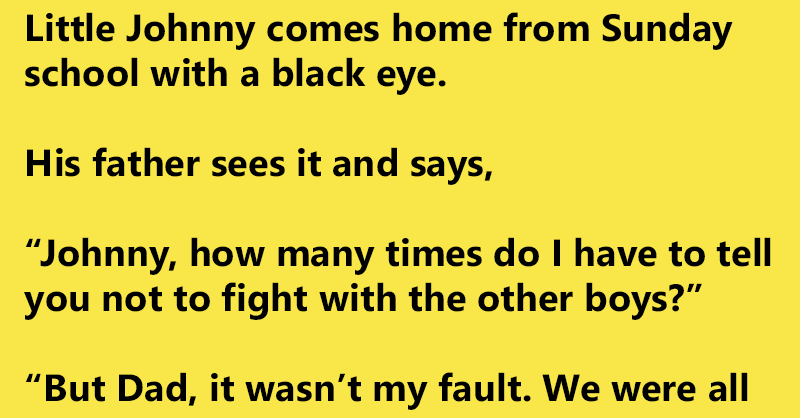 His father sees it and says,

“Johnny, how many times do I have to tell you not to fight with the other boys?”

“But Dad, it wasn’t my fault. We were all in church saying our prayers. We all stood up and my teacher in front of me had her dress in the crack of her b*tt. I reached over and pulled it out. That’s when she hit me!”

“You don’t do that kind of things to women.”

Sure enough, the very next Sunday Johnny came home with the other eye black and blue.

“Johnny, I thought we had a talk!”

“It wasn’t my fault. There we were in church saying our prayers. We all stood up and my teacher in front of us had her dress in the crack of her b*tt.

Then Louie who was sitting next to me saw it and he reached over and pulled it out. Now I know she doesn’t like this, so I pushed it back in!” Little Johnny was sitting in class doing math problems when his teacher picked him to answer a question,

“Johnny, if there were five birds sitting on a fence and you shot one with your gun, how many would be left?”

“None,” replied Johnny, “cause the rest would fly away.”

“Well, the answer is four,” said the teacher, “but I like the way you’re thinking.”

Little Johnny says, “I have a question for you.

“Well,” said the teacher nervously, “I guess the one sucking the cone.”

“No,” said Little Johnny, “the one with the wedding ring on her finger, but I like the way you’re thinking.”