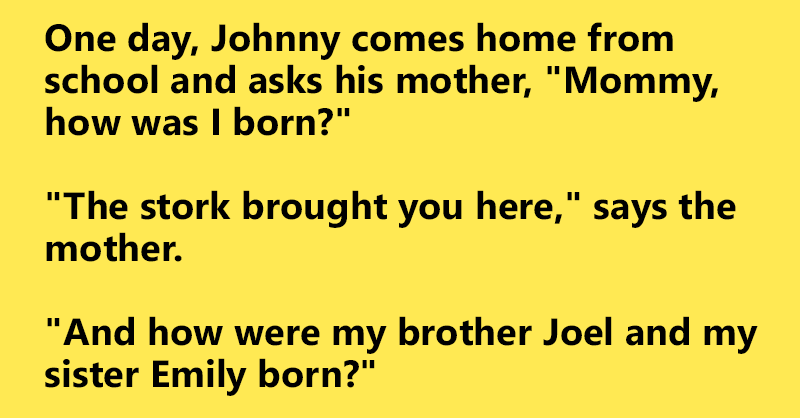 One day, Johnny comes home from school and asks his mother, “Mommy, how was I born?”
“The stork brought you here,” says the mother.

“And how were my brother Joel and my sister Emily born?”

“The stork brought them, too.”

“And how were you born?”

“The stork also brought me.”

“Did the stork also bring Uncle George and Aunt Ruth and Cousin Evan and Cousin Lisa?”

“And did it bring Grandma and Granddad and Great-Uncle Jim and Great-Aunt Harriet?”

“And did it also bring all your cousins and their children?”

A few hours later when Johnny’s father comes home, Johnny decides to ask him similar questions about his side of the family. “Daddy, how were you born?”

“The stork brought me here,” says the father.

“Did the stork also bring Uncle Warren and Aunt Linda and Cousin Harold and Cousin Susie?”

“And did it bring Granny and Grandpa and Great-Uncle Bob and Great-Aunt Alice?”

“And did it also bring all your cousins and their children?”

A week later, Johnny’s teacher calls his parents into her classroom.

“There’s something I need to show you,” she says. She shows them a paper that Johnny wrote that begins, “This paper on childbirth has been very difficult to write because there hasn’t been a childbirth in my family for three generations…”