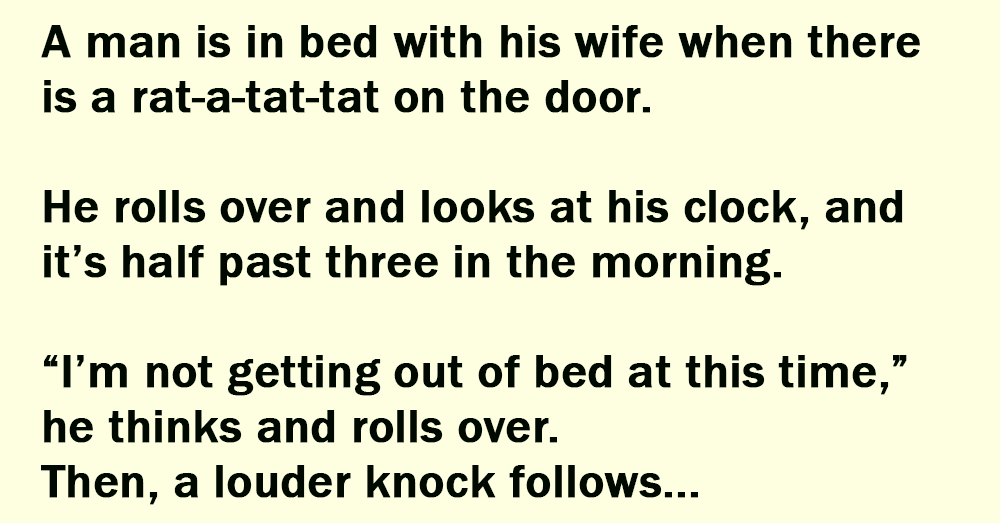 A man is in bed with his wife when there is a rat-a-tat-tat on the door.

He rolls over and looks at his clock, and it’s half past three in the morning.

“I’m not getting out of bed at this time,” he thinks and rolls over.

Then, a louder knock follows.

“Aren’t you going to answer that?” says his wife. So he drags himself out of bed and goes downstairs.

He opens the door and there is a man standing at the door.

It didn’t take the homeowner long to realize the man was drunk.

“No, get lost. It’s half-past three. I was in bed,” says the man and slams the door.

He goes back up to the bed and tells his wife what happened and she says,

“Dave, that wasn’t very nice of you. Remember that night we broke down in the pouring rain on the way to pick the kids up from the babysitter and you had to knock on that man’s house to get us started again? What would have happened if he’d told us to get lost??”

“But the guy was drunk,” says the husband.

“It doesn’t matter,” says the wife.

“He needs our help and it would be the right thing to help him.”

So the husband gets out of bed again, gets dressed and goes downstairs. He opens the door, and not being able to see the stranger anywhere he shouts,

And he hears a voice cry out,

So, still being unable to see the stranger he shouts,

“Where are you?” And the stranger replies,