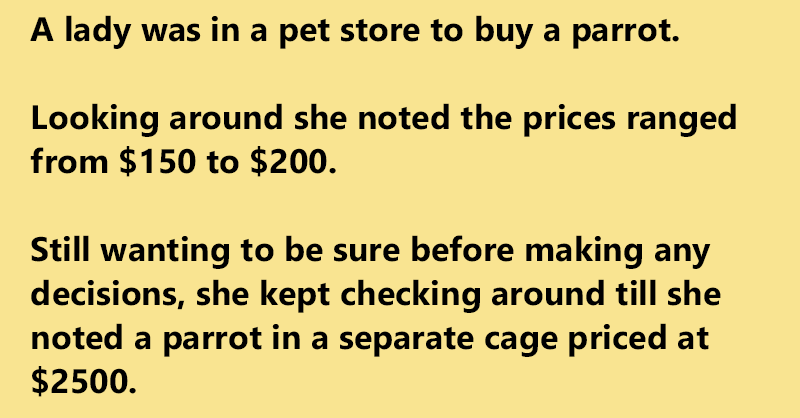 A lady was in a pet store to buy a parrot.

Still wanting to be sure before making any decisions, she kept checking around till she noted a parrot in a separate cage priced at $2500.

Immediately, she called the salesman and asked him,

“Why does this parrot cost too much? What’s so special about it?”

Salesperson says: “madame, this parrot is a genius. It can answer any question. It actually was trained in the USA.”

“Oh really,” she said partially convinced before turning to the parrot and asked, “how do I look?”

The parrot takes one look at the lady and quickly replied,

The lady was pissed off, turned to the salesman and said,

“I appreciate your parrot was trained in the USA. However, it’s very rude, so I can never spend a dime on it.”

“I apologise for that madame. If you don’t mind, can you give me just three minutes of your time? I’ll be right back,” said the salesman before taking them to the back of the store where he locked it the freezer for two minutes and took it out again.

“If you dare disrespect that lady out there again, you’re frozen meat,” he said as the shivering parrot nodded in agreement.

The salesman finally took the parrot back to the store and formally apologise to the lady and told her that she could ask another question.

“Okay, let’s see,” she said and turned to the parrot again,

“assuming I get home one day with a man what would you think he’s?”

Without missing a beat, the parrot responded, “your fiance.”

“Excellent,” she responded impressed, “what if they were two men?”

“That would be your fiance and his brother.”

“Your fiance, his brother and your brother.”

At that time the parrot looked at the Salesman and swallowed heavily,

“your fiance, his brother, your brother and his best friend.”

“So sweet,” she said smiling,

“what if it’s four men and a teenage boy?”

“Freeze me all you want!” shouted the parrot to the salesman,